"What's the purpose of living if I can no longer play music."

A sad phrase with a desperate expression.

Jaz went on a journey where he could play. That was the best decision he could have since he loved playing music too much. Playing music in their hometown was banned because the people thought of it as a curse. Recently, a lot of people died during the concert of a popular rock star. Before that, a lot of tragedies happened. The people in that town believed that the music was the main reason for their deaths.

"Where are you going, Jaz?"

A loud voice from Jaz's mother called him when he was walking a distance from their house.

"You know mom that music is my life, right? Obviously, without it, I can't find a single meaning in my life."

He paused. Looked at her mother feeling sorry that he needed to leave.

"Don't worry mom, I know there's something going on here. I'll be back for sure when I find it, but for now, please stay away from music and stay safe."

Her mother tore but Jaz was determined to go on a journey.

Going on a journey for much longer made Jaz sad. He rested. He was hopeless and tired. He thought of nothing to be afraid of. He leaned his back on a tree and sheltered himself from the heat of the sun. He was carrying a guitar all the time, even though it was prohibited to play, or else his life would be at risk. He didn't care about it and attempted to of playing it.

A single play of his guitar felt him. He started smiling while playing, despite the danger he could be in. The dark world that he often saw all of a sudden brightened when he played.

As he played longer he heard voices, though it was unclear. He ignored it and continued playing. He closed his eyes, singing and playing a song.

He couldn't take it. He felt amazing while playing. He felt like he was floating in the air.

He opened his eyes.

He saw himself floating in the air. He saw notes of the music bouncing as he was surrounded by it. He stared, wondering. How could these notes of music look alive? He realized that the notes created music too. He then stared at it again and found that the notes were alive. They have no eyes, they only have ears and mouth, perhaps they were born specifically for music. They were gracefully dancing and singing. Instead of being afraid because they were not like human beings, Jaz confidently sang. Thanks to it, the world filled with sadness was replaced with happiness.

Started by it, Jaz's journey was never lonely like before. When he got tired, he simply stayed far from the people and played music. Also, he was being accompanied by his newly friends, the notes of music. 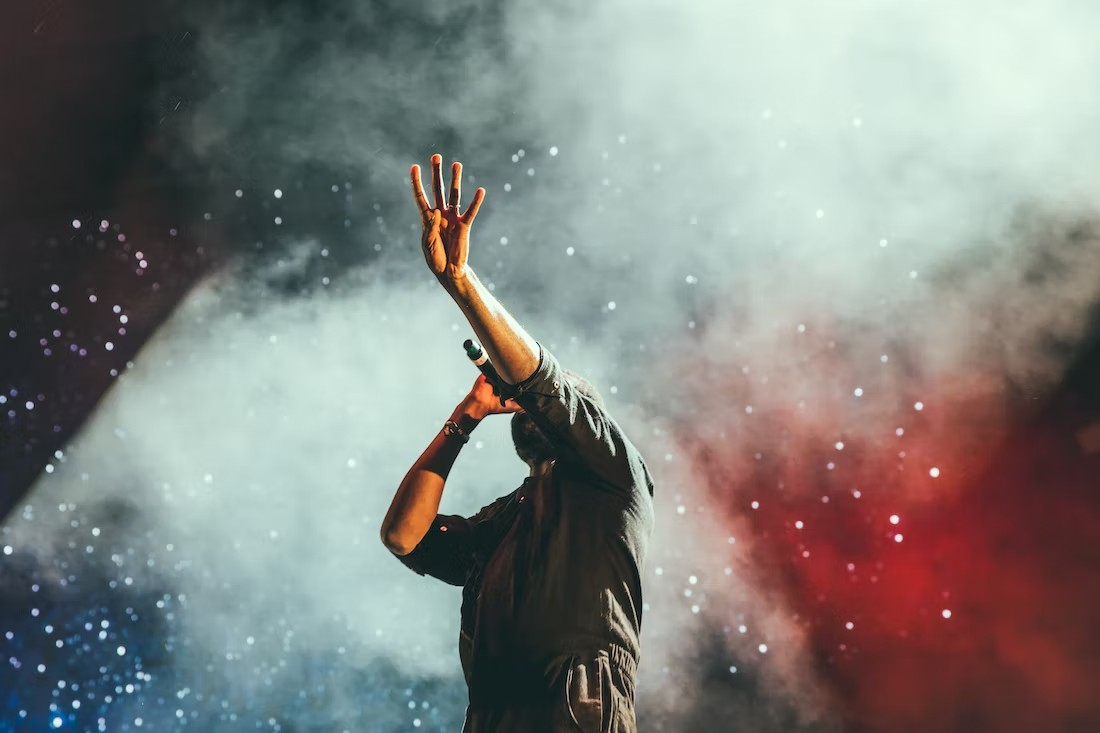 He was playing music when all of a sudden he heard noises. There was a house slowly crushing. He stopped playing and decided to witness what was happening. He found out that in that house there was a child who accidentally played music through a speaker.

Jaz wondered what was that black smoke above the house. It was like a cloud but stayed only in that house above. Jaz didn't do anything but why the guitar he was holding made a sound. When I looked at his guitar, the notes were the ones playing.

The black thing heard it and slowly approached towards him. He was terrified. He didn't know what to do but unconsciously he played the guitar. The notes he was always with surrounded him and created different colors like rainbow. He began to sing a lullaby because that's what his instincts wanted him to do. He felt like the notes he was always with inspired him to do so. He thought that black thing was a curse of music and he needed to counter it with lovely music.

"The music will just create a bad impression on everyone."

"The music will just provide sadness to those people who are in pain."

"Screw the music. It should not be born from the beginning."

In that smoke where Jaz was inside he saw people cursing music. He saw people who didn't love the music. He saw as well that there were notes crying because of what they heard. The notes slowly turn themselves into black. Then Jaz realized that the people were the ones who created the curse themselves. That's what they get for hating music instead of loving it.

The last part of the song that Jaz played touched the hearts of those notes turned into black. They were slowly calming. The anger and the hate feeling of that black thing provided all of a sudden faded.

Jaz played the last tone of the guitar loudly and the surroundings became full of colors. The fear of everyone was feeling that times were replaced with joy and love.

Magically, the house that was slowly destroying was turning back into normal as if nothing had happened. Then on, it became quiet, and what the child was playing continued. Surprisingly, the people were amazed there and all of them played music too. The place became joyous because the people were longing to hear music. Dancing, singing, and laughing were happening in that place. The notes were happy by it and Jaz remembered his promise to his mother.

When he returned to his hometown he used a loudspeaker to reach the people who were near. He announced to come over because there was something he wanted to tell everyone. He didn't say he'd play music or else no one would come.

Fortunately, when people noticed what he was doing he was finished. It was evening but to people's surprise, the whole area was brightened with different beautiful colors when playing his guitar. The people who were gathered there immediately ran away. They were all afraid of what the music could bring to them. His mother stayed there because he trusted his son.

He continued playing the music and everything that happened was magical. The different colors created by those notes and the soothing feeling. The people stopped running because they realized that nothing was happening. Added with the power of the notes that comforted the people.

Jaz was like doing a concert, enjoying his music and so everybody. Just like what happened to the previous town he visited. Everyone again loved music.